Home > What is papillomavirus ?

Papillomavirus causes one of the most common sexually transmitted infections in women and men.

Papillomavirus infection is common at the beginning of sexual life (between 18 and 25 years) in 1/3 of young women. The risk of infection decreases with age and is greater in young sexually active women and less in men. However, about 70-80% of the sexually active population will be in contact with papillomavirus during his sex life.

In 90% of cases, infections disappear spontaneously after 2-3 years. In 3-10% of women, the virus will persist and develop cervical intraepithelial neoplasia (CIN), a precursor to cervical cancer. Between the onset of an oncogenic HPV infection and the appearance of cervical lesions or cancer, it may take several years.

In Belgium, cervical cancer represents the 8th most common cancer in women. Every year about 650 cases of invasive cervical cancers are reported and about 200 women die (1).

About 200 types of viruses belong to the papillomavirus family, of which about 40 cause lesions in the skin, oral mucosa and genitals. HPVs are divided into two groups:

HPV types 6 and 11 (low risk) cause more than 90% of condylomas and are exceptionally associated with cancers.

HPV types 16 and 18 (high risk) cause 70% of cervical cancers. These two types of virus are often asymptomatic, with the lowest rates of elimination by the body, increasing the chances of developing cancers. 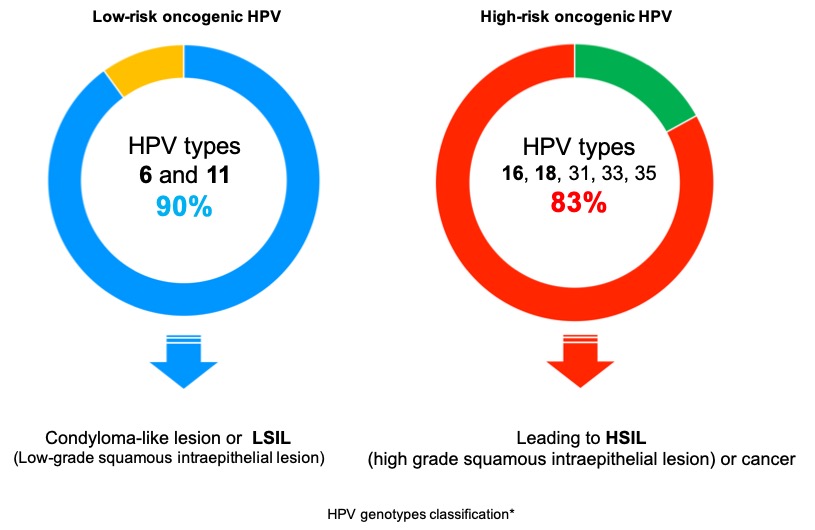 How is it transmitted?

Papillomaviruses are transmitted only through direct contact with mucosa infected with the virus (intimate relationship) or contaminated linen.
While many years can pass between the infection of the woman and the discovery of lesions in the cervix, in men the clinical manifestations of HPV infection can appear after a few months, to detect early infection and prevent transmission of the virus and the occurrence of lesions or cancer.
Papillomavirus infection is more common in multiple sexual partners, although the risk of infection also exists in a stable relationship with a single partner. An HPV positive pregnant woman has a higher risk of giving birth to a child who will be affected by recurrent respiratory papillomatosis after birth.

How to protect yourself?

In HPV infections, condom protection is incomplete because it does not cover the entire area during intimate contact. However, as with all sexually transmitted infections, it remains recommended.

There are currently vaccines against HPV infections that can prevent cervical cancer. However, vaccines do not protect against all HPV types and have no therapeutic effect on existing lesions. Vaccination is ineffective in preventing about 30% of cervical cancers.

Cervical cancer screening tests are essential. A pap smear is recommended every 3 years for women aged between 25 and 64 years. In the case of abnormal result, additional examinations must be carried out to exclude the diagnosis of (pre)cancerous lesions.

Persistent infection with oncogenic HPV causes lesions of the cervical epithelial cells (the cervix) that can evolve, after 10-15 years, to cervical cancer. Oncogenic HPV can affect other mucous membranes and also cause other types of cancer.

Cervical intraepithelial neoplasia (CIN) develops in the cervical transformation zone and is characterized by disorganization and proliferation of more or less differentiated atypical cells. Lesions begin with minor changes, CIN1, and progress to CIN2 and CIN3. The risk of progression to invasion increases with the severity of the abnormalities and some factors increase the risk of malignant progression (HIV, smoking, cervix infections and inflammation).

Are you familiar with HPV?

Test your knowledge about papillomavirus